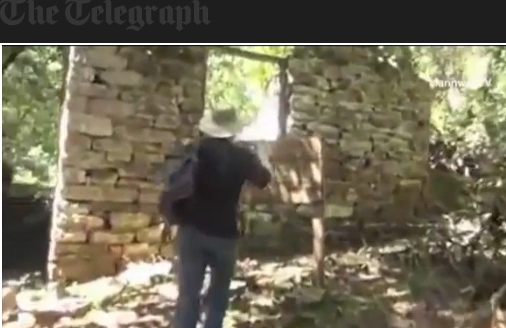 Stone structures in the remote region of Misiones are thought to be the ruins of a hideout build by Nazis, in case their leaders needed to flee Germany

Mr Schavelzon, from the University of Buenos Aires, spent months exploring the site in the Teyu Cuare provincial park, in the Misiones region of northern Argentina.

“Apparently, halfway through the Second World War, the Nazis had a secret project of building shelters for top leaders in the event of defeat – inaccessible sites, in the middle of deserts, in the mountains, on a cliff or in the middle of the jungle like this,” Mr Schavelzon told Argentine newspaper Clarin. He said that his findings were not yet definite, but he was convinced of their veracity.

Ultimately, though, the hideout wasn’t needed, because after the fall of the Nazi regime their leaders were welcomed to Argentina and allowed to live openly.
Thousands of Nazis, Croatian Ustasha fascists and Italian fascists arrived with the blessing of president Juan Peron. An estimated 5,000 Nazis eventually ended up in Argentina.

Posted On July 20, 2015
Ecuador is a perfect destination for kayakers. It hosts a wide array of rivers of warm waters and thick tropical rain forests. This gives multiple…

Posted On January 18, 2013
We are excited to announce immediate availability of charter helicopter transport in Guyana! This is our country's first civilian helo transport option, perfect for jaunts…

Top reasons to spend your adventure vacations in Brazil