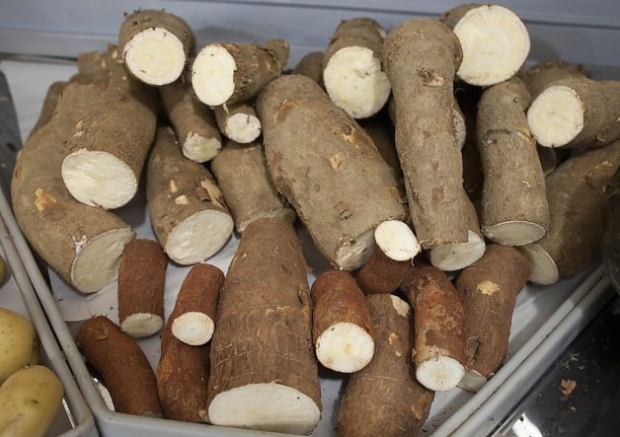 Manioc, long a staple of the Brazilian poor, is now being served with pride in upscale restaurants

But it’s here that the manioc root, long the staple food of the Brazilian poor, is making its entree into the elite world of haute gastronomy. And in a country where fine dining has always been synonymous with European food, especially wheat- and sauce-heavy French and Portuguese cuisines, the restaurant’s use of this humble, homegrown tuber is the stuff of a culinary insurrection.

Grown in some 80 countries worldwide and known internationally as yuca, cassava or mogo, manioc has its origins in Brazil: It was the main food source for indigenous tribes from across the width and breadth of this giant nation since before the discovery of the New World. Even now, manioc remains an important source of carbohydrates, especially among Brazil’s working class, who grind it into a rich, nutty flour or deep-fry it into greasy fries.

Now, top chefs in Brazil and beyond are turning the manioc into The Tuber, unearthing it from its peasant roots and placing it on some of the choicest plates in a defiant, nationalistic gesture.

The Brazilian elite has long tended to look down their noses at manioc, which, because it grows wild with no need to be tended, was regarded as a “lazy” crop, says Teresa Corcao, the chef at O Navegador. For her, rehabilitating the manioc and other native plants is key to reclaiming an authentic Brazilian identity – particularly as the country, now the world’s eighth-largest economy, ascends to the international stage.

Corcao has teamed up with chefs from 17 other top Rio restaurants to promote the tuber. In Sao Paulo, Brazil’s most famous chef, Alex Atala, is known for serving up classic European dishes using native Brazilian ingredients. And even as far afield as New York, celebrated French-born chef Daniel Boulud, a confirmed Brazilophile, also incorporates Brazilian foods, including manioc, which is also known in Brazil as aipim.

“In Brazil, we were taught by our colonizers from the very beginning to want to be something else than what we are,” said Corcao, who also heads Instituto Maniva, a nongovernmental organization dedicated to raising the profile of manioc. “That attitude is still totally reflected in our diet. We have this incredible food, the manioc, but because it’s seen as an ‘Indian’ food, it’s stigmatized.

“So we imported wheat – which is of course not native to Brazil – and started relying more and more on bread,” said Corcao, a 57-year-old self-taught chef who learned the basics of cuisine as a child from the cook in her family’s bourgeois Rio home. “The further you were up the social ladder, the less manioc and more bread you ate.”

Not anymore, at least not at O Navegador. Housed on the top of the Naval Officers Club in Rio, it was once a traditional restaurant catering to the city’s moneyed elite with a menu heavy on European dishes such as filet mignon with pepper sauce or three-cheese ravioli.

In the three decades since she took over the restaurant, Corcao has steered toward something altogether closer to home. On the menu now, a creamy mousse of shrimp and manioc; confit cod and manioc drizzled with aioli sauce; fish of the day with a manioc and banana puree in guise of mashed potatoes.

Manioc in some incarnation, steamed, souffled, stir fried, plays a role in nearly every dish, and not even the desserts here can get away from the versatile root. In the restaurant’s version of that Italian standby panna cotta, manioc replaces the namesake “panna,” or cream.

Recent research underscores just how healthy, hearty and versatile the manioc is.

Posted On January 18, 2013
Manioc, long a staple of the Brazilian poor, is now being served with pride in upscale restaurants Rio De Janeiro -- With its starched white tablecloths…

Posted On February 14, 2015
Are you looking for a family getaway where you can enjoy and relax? If you want to have an extreme adventure or just have a…

Travel in Latin America: Which plugs will you find?